On our first day in Dangriga we decided to take it easy. We slept in our cabana until about 10am. The sound of the surf and the cool breeze made it easy to sleep late. We woke up to Ruthie, our hostess, shouting to us through our window whether we wanted breakfast. We were served a simple breakfast of homemade bread, jam and juice.

After breakfast we got our gear together and took a walk around Dangriga. We headed in the direction of the market hoping to pick up some souvenirs. Walking about town was a fun experience; the streets were full of friendly Garufina, Creole, and Mayan people. We browsed the market and found ripe, inexpensive pineapple and papaya for sale. We continued exploring, walking the quieter roads off of the bustling main street. We walked past a few schools, an LDS church house, and were even offered some “green stuff” which we politely declined. On our way home we waxed hungry so we stopped at a random roadside eatery and ordered the usual: beans, rice, chicken (or fish or beef) with some delicious sauce over all of it. We also drank some saril, a tasty Jamaican tea made from the saril flower and ginger. Ruthie helped us prepare the pineapple and papaya and we sat in the shade on the beach, reading our books and eating our fruits. It was very relaxing. Ruthie had her son get down some coconuts from the tree and we drank the juice, after which Ruthie then told me how much to tip her son. That was kind of annoying – we ended up avoiding the helpful Belizeans because for the most part when they were helpful they expected a tip. I blame tourists for creating that false economy. 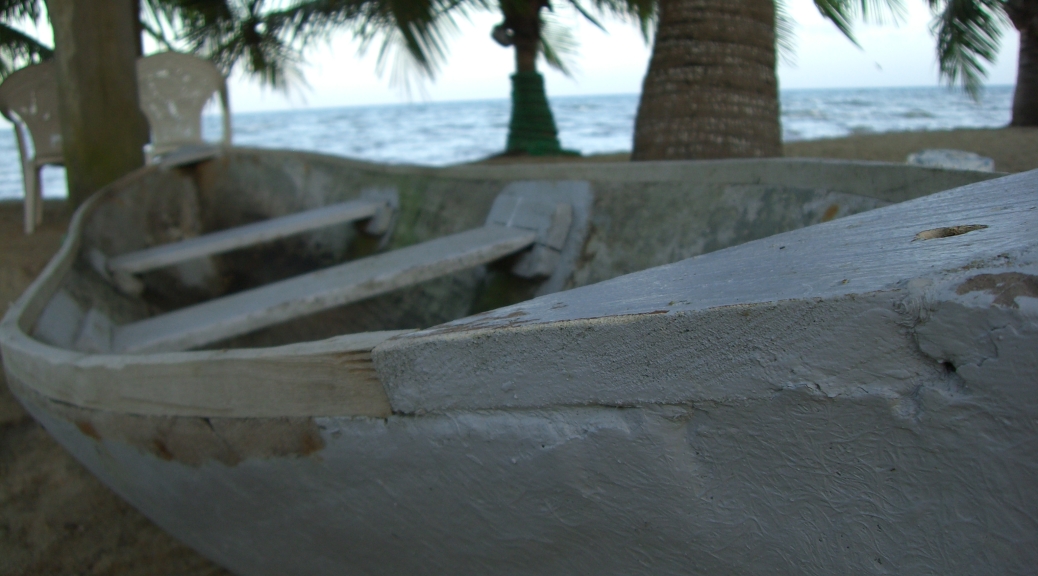 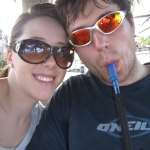 In the evening we ate dinner at Ruthie’s with an Irish couple staying in the next cabana, then went to bed.

**Day 3: ** We woke up early and walked out to the bus terminal to catch a bus heading south. After a short ride (maybe 25 minutes) we arrived at the Mayan Village outside the Cockscomb Jaguar Reserve.

The reserve is located about 7 miles from the main road and there are taxis that take people up to the reserve, however they are $20 USD ONE WAY. We were on a tight budget so we stubbornly decided to walk. It was a beautiful day, not more than 85 degrees (F) and the road was lined with bushes of big beautiful flowers. We found some “12 o’clock”, the local name for a plant that will fold itself up when touched. And just before reaching the park, we saw a sign that cryptically said “Plane Wreck 500m” so we investigated. 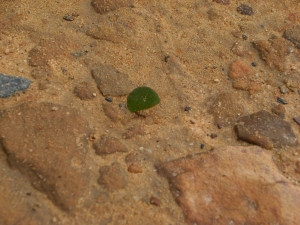 Soon, however, the walk started losing its charm: we were wearing our new Tevas without socks (read: blisters). About halfway up we realized we were doomed, and when we finally made it to the reserve I could barely walk.

We looked at a map with a helpful park guide and decided a tubing trip down the river would do our feet some good. The tubes were only $5 USD for two. We walked the short trip to the entry point, and it was at this moment that I remembered my fear of rivers and lakes. The park guide’s affirmation of snakes in the river didn’t help. I grabbed a big stick and gingerly started floating. The jungle was beautiful. The birds were singing and the sun was shining and I was on the lookout for snakes. Julie thought it was hilarious that her big strong bad boy was petrified by an unseen terror slithering toward him in the clear, cool water. At one point we made a wrong turn and found ourselves in a smaller river running parallel to the main river, full of branches and scary spiders. Fortunately our little terror tunnel met back up with the main stream. 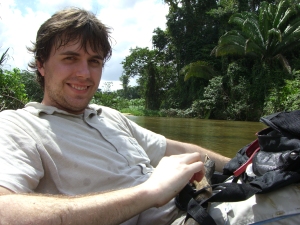 In order to get out of the river we were supposed to look out for a rope running across the river, grab it, and pull ourselves to shore. After that, we were warned, there are dangerous rapids. When we finally saw the rope we did manage to grab it and start pulling ourselves to shore, however it was at that moment that I saw a spider on my leg. It wasn’t particularly big or scary, but it did take all of my attention to fling it off. When I finally rid myself of the spider, I looked up and saw that I had drifted beyond the rope’s safety! I jumped off my tube, threw my pack to Julie (who barely caught it), and forged my way back up river. I nearly died.

Being out of the river, we decided to leave our tubes on the trail and make the small hike to the waterfall near Ben’s Bluff. The waterfall was cool and dark and made for a great place to relax. We contemplated swimming under the waterfall but eventually we both lost our nerve. It was dark and scary, and I couldn’t help but imagine huge tentacles grabbing me when I got close. Julie was braver than me though, and made a valiant effort. 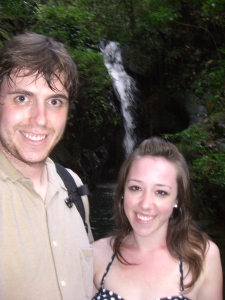 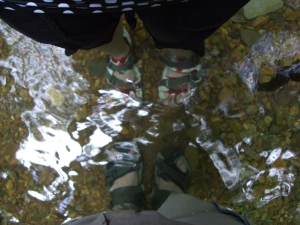 We relaxed at the falls for a while and even made a friend with an indigenous crab named Crab Cake. We remembered seeing that Ben’s Bluff appeared to be somewhat close to the falls when we looked at the map earlier, so we decided to once again abuse our feet and go to one last place before heading back for the day.

The trail to Ben’s Bluff looked bad to begin with. I thought “Ben’s Bluff… bluff… aren’t bluffs above everything…?” 45 minutes and nearly as many “lets rest here for a minute”s, we made it to the top. What a beautiful view!

The hike down to the park visitors center seemed longer than it was because our feet and legs had reached their limits. Arriving at the visitor center we realized that we did NOT want to hike down to the road to catch our bus. We found another American couple from Colorado who were going down as well so we split the $20 USD cab.

While waiting for the cab we were attacked by small, biting flies. I looked at my legs and saw tiny pools of blood and realized that they were eating me!! This was when we realized that I shouldn’t have convinced Julie to not bring the bug repellant (“ah there’s no bugs in Belize…”).

Arriving at the road we quickly surmised that we missed our bus. We waited, hoping another bus would come, but it started getting quite dark. I remembered the times in the Philippines where my companion and I would hitchhike our way home when it was too late for public transportation, so I ‘nonchalantly’ started poking my thumb in the air. The problem with trying to hitchhike without letting anyone know is that no one knows you’re doing it. So, at the approach of a big tanker truck I blasted my thumb out with such force that he couldn’t do anything BUT stop. 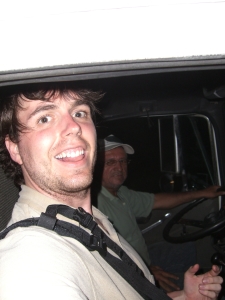 Our friend Hugo was trucking gasoline all over Guatemala (where he was born) and Belize (where he lives). We were so grateful, even though Julie had to sit on my lap and he wasn’t passing by Dangriga directly (we would be dropped off a few miles from Dangriga). We even invited him to dinner (somewhat of a ploy on my part to get him to take us all the way to Dangriga, but mostly because we were so grateful) but he looked at us, shrugged sheepishly, and said “I’m late…”. Next time Hugo, next time!

After he dropped us off at the junction, we found a good spot to hitchhike the remaining distance. After just a minute or so, a couple in a pickup truck stopped and gave us a ride to our cabana in Dangriga. As we rode, we spoke through the window and found out that they were Jehovah’s Witnesses from Spain on a mission. Hugo and the JW’s were like angels to us.

We were on such a high after that – what a perfect day! And to top it off, while we were walking to the eatery to grab some dinner we met two LDS missionaries who were assigned in Dangriga. It was fun talking with them about the work in Dangriga and the branch they had there.

After dinner we fell asleep almost immediately to the soothing sound of the surf just 20 feet away.

This is part 2 of a 4 part blog about Julie and Bradford’s trip to Belize. Posts 1 and 3 will are by Julie, while posts 2 and 4 are by Bradford.

Oh Bradford. I almost shouldn't have read this at work! I had to really work hard to not explode into burst of jovial laughter. Ah... you write so cleverly and really brought me back into the whole experience. I loved it. Thanks for the great blog!

Wow! What a fun adventure! I can't wait to read about the rest of the trip!
You were both pretty brave floating down the river. I don't think I could have done that. Also Julie, that is a dang cute swim suit.

I'm LDS from the UK... I'm thinking of going to Belize for my Medical internship next Summer... would you recommend it? I've heard Belize city is very dangerous so considering going to the Southern Regional Hospital in Dangriga. Not having much luck hearing back from the people at the Dangriga hospital though, hmmm. If you have any advice about Belize/Dangriga/things to see do/church/contacts, that would be very much appreciated! Thanks so much and I'm glad to see you had such a fun trip :)

I'm jealous, I'd love to go back. We also heard Belize City was dangerous, but we were there only during the day and we felt perfectly safe. Our favorite place was definitely Punta Gorda - it was more authentic I felt, more authentic Belize. In the [Punta Gorda blog post](/2009/punta-gorda/) we talk about a couple British expats Ian and Kate, they might be great resources on finding opportunities in Southern Belize. Depending on how long you're there, you can experience much more than we did. If you can find phone numbers I would suggest calling over emailing, we got through using the phone while we were planning. I used Jajah.com to call for cheap, but I don't know if that is available in the UK. Regarding church, we didn't find a church but we were only there for a week. If you're there longer I would suggest contacting the mission home, the church's website wasn't accurate for Dangriga and I don't think it lists all the branches or groups you could attend. Good luck with your trip! I hope you have fun, let me know how it goes.