First off, I apologize to the blogosphere (and a million times over to Bradford) for those of you who have been gripping the edges of your seats waiting to hear how our Belizean adventure further unfolds. I have been slacking and putting it off and off and off… All Bradford’s gentle motivations to get me on the ball were left for naught until today. Now, that being said, on to Dangriga!

We boarded our plane leaving from Salt Lake City to Belize City (switching planes in Dallas/Ft. Worth) at 8:20 AM and arrived at 3:55 PM Central time. The flights weren’t too bad, I was actually able to sleep some, thanks to ear plugs, a sleep mask, and less than 3 hours of sleep the night before. Something about an early morning flight encourages all-nighters… Once we got off the plane (via a rolling staircase like you see in all the movies about tropical places…) we retrieved our checked bag, went through a customs process, and were promptly offered a cab ride into the bus station downtown by a friendly cab driver. His name is John and he was very chatty and readily made conversation. Bradford held up most of our end of the conversation while I marveled at the scenery, warmth, and the curls already forming in my hair from the humidity.

After about a 20 minute cab drive we arrived at the bus terminal. We paid our friendly cab driver who left us with his business card and one last time tried to convince us to have him take us to Dangriga in his cab rather than the bus. We politely declined, saving us about 100 American dollars doing so, and then faced the barrage of men eagerly waiting to assist us in finding the right bus to Dangriga. It wasn’t overly pushy, which I found refreshing. A lot of the places I’ve been have had similar hordes of men and I’ve usually felt overwhelmed, accosted, and sometimes mildly under attack . I was relieved to find it less overbearing here. We did end up following a friendly individual who showed us where our bus would be. I can’t remember his name now (another reason to write about these things soon after they transpire instead of waiting…) but he was really easy going and accommodating. Bradford and I were starving and hadn’t eaten in what felt like eons and our bus wasn’t arriving for a few minutes so our friend took us over to a roadside cafe (though nothing but the sounds of sizzling food from inside indicated it was anything but a shack) and we had our first Belizean meal. It was delicious! It was beef (Bradford had chicken) and rice and beans smothered in some kind of spicy red sauce that I still can’t really describe because nothing I’ve ever had tasted like it. It came with a small pasta salad on the side. It was incredible. Bradford and I could have easily shared one plate satisfactorily too, even in our famished state. It cost us about US$6 for the whole meal.

Before too long our bus arrived so we gulped down the last of our Fantas and hurried back to the terminal. We left our friend with a tip (and the rest of our dinner that we weren’t able to finish) and boarded the painted up old school bus that was our ride. We chose to ride only the James line buses while we were in Belize because its the only private bus line that stuck it out when the government was trying to monopolize the bus lines a few years back. Its the line the locals try to support. They’re easy to tell from the other buses because they are painted in green, red, and yellow horizontal stripes. Ours was an “express” bus to Dangriga and even so it ended up being over a 6 hour ride. By the time we pulled into the terminal at Dangriga it was well past dark. Bradford got in a few snoozings and I was left pretty awake despite my yearnings for some shut-eye. So many times along the ride I thought we were “almost there” but I was only right once… Regardless, it was neat to observe what we could of the beautiful country before it got dark.

Once we got to the terminal at Dangriga we shuffled off the bus and tried to orient ourselves with the quiet, dimly lit town. We were solicited a cab ride or two but Bradford was confident the cabanas (Ruthie’s Cabanas to be exact) we were staying at were only a short walk away. After we walked about 30 ft one of the same cab drivers pulled over and generously gave us a free ride the rest of the way. Which ended up being only about 100 yards further. We thanked him and gave him a tip and then we walked up to the robe-clad Ruthie who had been honked out of her house by our driver. In her Garifuna accented English she told us that she was so worried about us and had been waiting on her porch all day for us to get there and when she didn’t hear from us she became even more worried. She immediately struck us as a very warm, spunky lady who casually addressed us as “baby” whenever she spoke to us. She took us to our cabana that was about 50 ft away from the ocean shore and we settled in.

Even though we were tired we took a few minutes to walk back to town and grab a few snacks from one of the still open shops. For dinner we had a can of pringles, a snickers, some local candy, and a bottle of water. While we ate we watched some cable from Colorado on the little TV in our cabana. We don’t know why or how they get Colorado’s cable down here in Belize but Bradford and I thought that was kind of funny. Not long after that, Bradford fell asleep and I soon turned off the TV and went to bed myself. The soothing sound of the surf breaking on the beach, plus a long day of travel made it too easy. 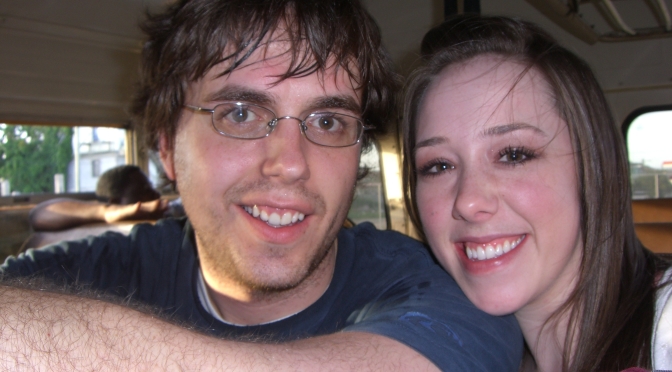 This is Bradford and me on the express bus from Belize City to Dangriga. We look a little weary already. This is the only picture of me on the entire trip with straight hair… The humidity took over soon after this was taken. I regret not taking more pictures of the whole experience. Next time we well get more. Because there WILL be a next time!

This is part 1 of a 4 part blog about Julie and Bradford’s trip to Belize. Posts 1 and 3 will are by Julie, while posts 2 and 4 are by Bradford.