Julie and I recently completed two weeks on a motorcycle, traveling more than 3500 miles in two weeks. This was a first for Julie, and a first for me in Canada. We bought a lot of new gear for this trip, which ended up making it pretty expensive since we were outfitting Julie with the proper gear for the first time. Despite that, it was fantastic and we saw and experienced some of God’s most beautiful creations.

How it all Began

It was only within the last 4 years that I had discovered the old man’s sport of touring. Since then I’ve been on several tours. My father and I have turned it into a sort of tradition to go on a trip every year. In the past 4 years we have gone to the Colorado Rockies, Yellowstone, and Death Valley.

We often spoke of touring Canada. My grandparents were full-blooded Canadians and raised my dad in Alberta. A few years ago I saw the pictures of perhaps the most beautiful lake in the world, Moraine Lake. These images cemented the idea in my mind that we were going to Canada to experience these things for ourselves.

It wasn’t until several years later that this dream materialized, and it was almost an accident. While we were visiting my parents in December 2013, my dad wanted to do a quick motorcycle trip. Because of time constraints and weather, we procrastinated the trip with the promise of a big trip the next summer. Later in the Spring, my dad’s neighbor sold me his immaculate 1999 Kawasaki Vulcan Nomad for a fair price. The Nomad is a touring version of the Vulcan, so it was perfect for the tentatively planned Canada trip. Since the bike was in Utah, I had to pick it up and get it back to St Louis.

After I bought the bike, it became certain that the Canada trip of my dreams was going to happen. We set a date, I took some leave, and the planning began.

Things like this have a habit of sneaking up on you, and we found ourselves scrambling to outfit ourselves for the journey.

Since Julie had never done any serious riding, we needed to outfit her. Several factors made this a difficult attempt, including budget, time, and since we’re expecting in December, Julie’s unique wardrobe requirements. The last factor was particularly difficult, because no one makes maternity gear and we don’t want to have to re-buy new gear for her after the baby’s arrival.

We found some good deals on clearance or otherwise discounted gear that was highly rated. I already had all the gear I needed, albeit hot-weather gear (which caused issues later in the trip).

We purchased a Cortech Women’s LRX Series 3.0 Jacket, which is a textile jacket that offered a lot of adjustment options (great for an expanding middle-section) and some pretty solid armor in the shoulders, elbows, and back.

Julie also needed some boots, so we picked up a pair of the Joe Rocket Women’s Trixie boots, which she really liked. We also bought some Spidi Ladies G-Flash Textile Gloves which looked great with the rest of her gear, but had so much airflow that on the colder days Julie’s hands were uncomfortably cold.

Pants became a problem. We bought a pair of FirstGear Women’s 2011 HT Textile Overpants too late, and since Julie left ahead of me she wasn’t able to try them on. They were way too small; we believe they are a European size instead of American. They are great quality, but they were just too small. Julie eventually gave up and borrowed my dad’s Sedici overpants. They were much too large, but in comparison to the too-small FirstGear pants, comfortable and warm. 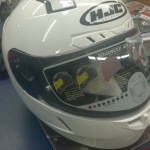 The only piece of gear that I bought solely for myself was a Shoei Neotec modular helmet, It was expensive but is a fantastic helmet. For Julie we picked up a HJC CL-17 from Belleville Honda. It wasn’t modular, but it is Snell and DOT rated and a great value.

Finally, we bought some rain gear, a Nelson-Rigg 2-piece rain suit which we gratefully did not have to use.

I picked up a Monoprice MHD Action Camera to mount on the motorcycle to capture some of the prettier rides.

Additionally, I picked up some uClear HBC 200 Bluetooth intercom units and convinced my dad to do the same so we could enjoy communicating while riding. They were a huge disappointment. So much so that I wouldn’t be surprised if many of the favorable reviews online are the result of astroturfing.

Since this was Julie’s first trip, her comfort was pretty important to me. I didn’t want her to have a miserable experience for her sake and mine, since the possibility of going on future tours with her may have been in the balance. Even though the passenger seat on my Nomad is notoriously comfortable, I picked up a Pro Pad sheepskin-covered seat cover for her. She liked it, but never rode without it so it’s difficult to tell if it did any good. 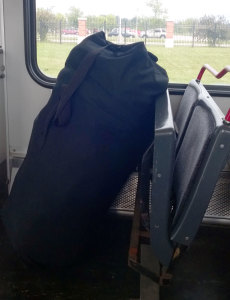 On 30 August I packed up Charlie for Julie’s mom to pick up and care for, then took the train to the Saint Louis airport. I packed all of our gear into a MASSIVE canvas duffel bag, taking a leap of faith that they would even let it on the plane. It was a haphazard collection of Julie’s and my gear, along with my clothing, a tent and a sleeping bag. 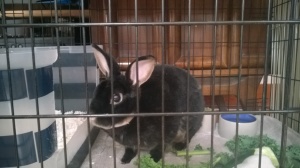 Julie left from a different airport, but we met up in the Denver airport for the last leg to Salt Lake City. It was great to see my parents again, but there was a lot of work to do to get the trailer loaded up and all our gear gathered up.

On the Road, but not on Motorcycles (yet!)

It was around noon the next day before we finally got everything loaded up, including my dad’s CanAm Spyder with its trailer, my Vulcan Nomad, all the camping gear, riding gear, and adequate snacks. I had the job of installing the uClear headsets into all of our helmets, but I had plenty of time for that on the 8-hour trip to Missoula, MT.

We weren’t 3 seconds into the trip before a catastrophe struck. Ok, near-catastrophe, but tell that to my nerves. I had a feeling to look back at the motorcycle as we pulled out of my parent’s driveway. I did, only to see the centripetal forces acting on my motorcycle tip it up, up, over, OVER! I started shouting at my dad to stop stop stop! When he finally did, I was staring in horror, disbelief and wonder as my motorcycle stayed not upright, but heavily tilted to the side toward the road. But it stopped tipping. It was just sitting there. I hopped out and saw that one of the trailer’s ramps had been placed directly underneath, which supported the motorcycle and stopped it from crashing to the road and being dragged behind us all the way to Canada. The motorcycle was apparently improperly tied down in our haste. I am still certain that I witnessed a miracle that day. And any time that the motorcycle was on the trailer, I had a strong sense of paranoia that kept me looking out the back window every time we hit a bump.

We finally made Missoula, MT late that night. We were beat from the day on the road and the race to make Montana before nightfall. We got a room at the Missoula Motel 6 (around $80 for the 4 of us after the senior discount) and crashed for the night. The real trip was about to begin.

This is an entry in my Canada 2014 travel log. Thanks for reading!

I'm still bugged about those first gear pants. They probably would have been perfect if I had just paid attention better to the sizing!!! They seem really nice. Maybe I can fit in to them someday, but they are pretty dang small. I'm glad you are documenting this trip!