I ended up staying in San Francisco an extra day. I spent the day swimming in the pool, trying to upload some posts at the really slow local internet cafe, and singing karaoke with the friends I made who worked at the resort. It was a nice relaxing day.

I went to sleep but didn’t sleep well because some ants somehow found their way into my room and every few minutes there was a new one on me tickling me. It was really frustrating. When I finally did wake up it was close to 11am and, after a quick swim, I checked out. When I left my room, I found out that the mattress outside my door was a popular hangout for gargantuan insects.

After getting stared at in Jollibee I headed south out of San Francisco toward Davao. I got a late start, about 1pm. I still expected to arrive in Davao by 5pm. The highway between San Franz and Davao was good quality and wound its way leisurely through the mountains. Between towns in the mountains I found a nice view looking down over the hills rolling endlessly into the distance. 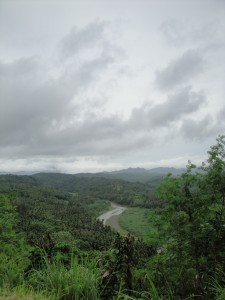 After snapping the above photo, I continued on my way and found the bike’s rear tire pulling hard to the right, dangerously so. I stopped quickly and confirmed my fear – the tire was flat. I was really confused at this point as to what I should do. I had anticipated this eventuality but since I was in the mountains I was a little hesitant about what my next step should be. I eventually started walking and found a house maybe 1/2 kilometer down the road. I asked the lady there where I could find a vulcanizing shop. She said there was one a few kilometers down the road, so I went back and grabbed my bike to start the walk.

Nearly to the vulcanizing shop, a friendly Filipino guy started yelling “hey Joe!” at me and asked if I had a flat. I said yes and he started to work taking care of me. He quickly told me there was a scheduled power outage all day but that I could just take off the tire and take it down the road to where there is power. By this time a crowd had formed. He found his friend and they finally found some tools and got the tire off. The two of them took off down the road with the wheel while I waited back on the side of the road, making friends with the onlookers, buying them Sprite and talking about my trip. 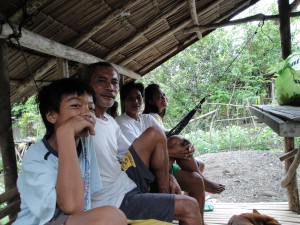 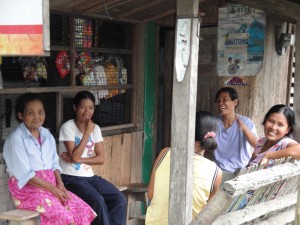 After a bunch of complications, three hours, and a few hundred pesos for a new tube (plus some extra for their help), I was on my way again to Davao.

Because of the delay I had about an hour and a half left but it was already getting dark. I personally experienced a couple of the reasons it’s not wise to ride after dark in the Philippines: 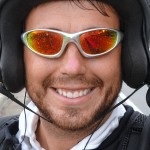 When I finally got to Davao I set about finding a place to sleep for the night. My first choice, Sampaquita Inn, was full. The next choice was also full. I eventually settled on the Imperial Hotel, an older dirty hotel sharing its building with myriad other business. It was really hard to find and not worth the effort; my guidebook must have been very out of date in regards to the entry for the hotel because it was supposed to be clean and tidy. Regardless, I got a room there; I had already spent an hour lost in Davao searching for a place to sleep. To make matters worse I lost my Oakley sunglasses. I bought them ten years ago from eBay. They, like my sandals, were close to my heart. Sunglasses, you will be missed.

After I got situated I headed out to find some food. I found a delicious chicken joint that served chicken and rice in the same style as the Manokan in Bacolod:

I would happily eat this meal every day of my life.

I slept in quite late the next morning. When I woke up I called up the Sampaguita Inn to make a reservation for that night. They were fully booked again. Frustrated, I scrapped my plans to stay 2 or even 3 nights in Davao, and packed up to leave for Malaybalay. Davao is a nice city, I would have liked to stay a little longer, but it was time to move on.

The road from Davao to Malaybalay is the most beautiful I’d been on in the Philippines. It wound up and over tall mountain ranges; it wound so much that it took me much longer to get to Malaybalay than I had anticipated and I experienced an equally miserable time driving at night for the last hour of my ride. The road took me higher and higher and higher, almost driving in the clouds at some points. These photos don’t do the view justice. 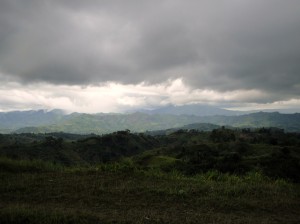 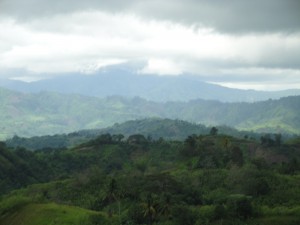 The sky was angry that day, but I wasn’t rained on much. I must have been chasing it though because the road was wet and it was quite chilly after a while.  The road wound so high that the vegetation was quite a bit different with lots of pines and different kinds of ferns and palms. Unfortunately I didn’t get any good photos to show this.

Coming down out of the mountains I was treated to the best views yet. Unfortunately point-and-shoot cameras like the one I am using don’t capture depth well at all so these pale in comparison to what it was really like.

My impression of Mindanao, especially on this leg of my trip, is that all the things that I found unpleasant about the Philippines were fixed in Mindanao: People still lived close together, but not on top of each other; horses, instead of being skinny little things, looked healthy and strong; there was uncultivated land; etc. It was refreshing. If I were to live anywhere in the Philippines it would be in Mindanao. This is an unexpected idea, I was wary of even visiting Mindanao because of all of the reports of terrorist-related activity in Mindanao. It has been perfectly safe… so far. I am almost certain that I could even take my trip through ARMM territory and be safe, but I’m not going to test that out. Below is a photo that illustrate why I like Mindanao so much; I found a pleasant little community in a valley up in the mountains.

The rest of my trip to Malaybalay was increasingly unpleasant because it was starting to get dark and I was getting anxious, not wanting to drive through mosquitoe valley. But I did and it just as bad as the night before. I eventually got to Malaybalay, a small town in between Davao and Cagayan de Oro. It was the last night of their yearly festival so after checking into Small World Hotel (which was a good value but I don’t recall the price), I roamed around the city and found some dinner.

The next day I checked out and headed north to Cagayan de Oro. The road was ok, but not like the road from Davao to Malaybalay. The view coming into Cagayan was very beautiful though.

I found a room for the night and slept well. I’ll be here for one more day while I wait for my laundry to be finished. They have whitewater rafting here that I might check out. Tomorrow I plan on leaving for Iligan or Dipolog. Iligan has some beautiful waterfalls that might be worth checking out.

Outside of Davao I stopped by a Mercury Drug to buy some water and a snack and I found this funny label for some chocolate cakes referring to how many cakes were in the package. I don’t know why but it made me laugh for a long time, making other customers stare at me. 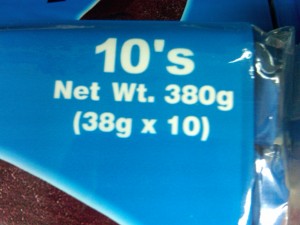 Wow! I wish I was there with you more than ever! It's so pretty. I can't imagine what it looks like in person. What is with the huge bugs? Maybe I don't wish I was with you... OK, I still do.

Wow- this place is amazing. Hope you're still alive and don't bring home any of those huge insects:)