Monday night I slept in Tacloban at the Welcome Home Pensione. I went to pick up my pants around 5:45pm but they were closed so I went to Jollibee and ate dinner. There was an upstairs dining area with a huge window that overlooked Tacloban port – watching the sunset was nice.

I returned to my room and watched a little TV. I left a while later to get some snacks and locked myself out of my room. I told the guard and he said it was ok, he could let me in when I came back. He was talking to a guy on a scooter and I started talking to them. I asked them where I could get some food that late, it was around 9 pm, and they recommended a Filipino style eatery that was open late. RG, the guy with the scooter, offered me a ride so I hopped on the back of his scooter and we scooted over to Bebe’s, which was full of people eating. The food there was cheap and good. I bought RG a meal and for the two of us it was only ₱100.

After we ate he asked if I wanted a tour of Tacloban. I said sure, I wasn’t tired and it sounded fun. So we just drove around – but because it was the night after elections barely anyone was out and about that late. Even the bars were closed because there was a ban on hard alcohol. So we just drove. Then, while we were headed kind of out of the city, I remembered reading stories of tourists in the Philippines who were offered a great exchange rate or something else great but were lured into a remote spot and robbed. I started getting a little uneasy but felt better when he turned around to go back. He had two plastic things sticking out of the top of his helmet like antennae; I joked that nobody was out because they heard that a giant chicken (me, my nose is my beak according to some Filipinos) and a giant dragonfly were roaming about. It was pretty fun.

Once I got back to my room I asked the guard to let me into my room. It was only then, not when I mentioned it an hour earlier, that he went to get the key from the person in charge of keys, who was by this time asleep. He was too scared to go inside the other compound where the workers slept because he might wake up the owner of the pension house so he just stood outside saying the person’s name softly. I finally got let in after I suggested he text the person.

The next morning I hung around a bit, hoping to get to the internet place and post my last post, however it didn’t open at 9, and didn’t open at 10 so I just gave up and started packing up. I went to pick up my pants, they looked like they were well made, now I can go to church! Yay! I left Tacloban just after 12pm Tuesday. 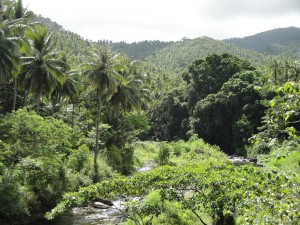 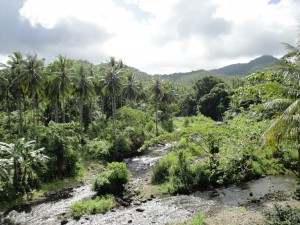 The road was nice and windey, a lot of fun on the motorcycle. I did have a really scary experience however; I was a ways behind a jeepney and got distracted by a sign. When I looked back at the road the jeepney was stopped right in front of me. Its brake lights didn’t work either. I was headed straight for its rear left corner but I managed to swerve and miss it. Because I leaned the bike way to the left and I was leaning to the right, my right shoulder barely skimmed the corner of the jeepney. It was really close and freaked me out. I was grateful I didn’t crash and figure it’s due to all the prayers my mom keeps saying she’s sending up for me.

There were a lot of bridges I crossed, and bridges give the best panoramic views of the countryside.

I finally arrived in Lilo-an around 4pm and headed straight for the ferry terminal. If I didn’t have to spend the night in Lilo-an I would rather not, there’s not much in way of accommodations. I found there was a ferry loading at 5pm, perfect! I bought my tickets and waited. 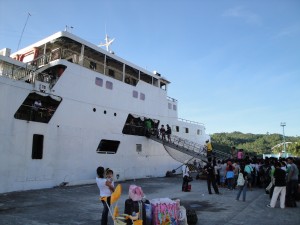 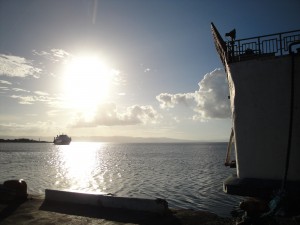 That huge crowd of people loading onto the boat had to make way for all the busses and trucks and me loading up in the car deck. I had taken off my gear by this point and strapped it to the back on top of my bag, but it was really surreal because every man woman and child was staring at me. I would have felt like a movie star if there were applause but as it was I just felt uncomfortable being the center of attention. As usual however, their initial curiosity wore off and they stopped staring.

Once I got on the boat there was another hour long wait as we waited for them to secure everything and head out toward Lipatan Mindanao. Out in the water was a bunch of kids with swimming goggles and flippers made out of wood asking people to throw pesos overboard and they’d dive for them. It was pretty entertaining and helped the time pass by more quickly. 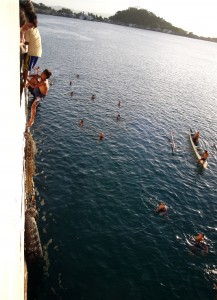 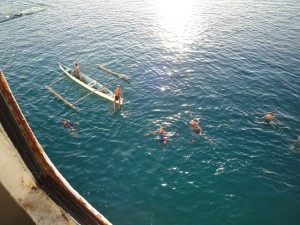 Our boat finally left port and I found the only other white guy on the ship and started talking to him the entire ride about travelling in the Philippines. He’s backpacking here for a few months. He came from Cambodia, Laos, Thailand, and has been traveling for more than 6 months. Because we would arrive around 11pm, we were both wondering what we’d do for accommodations in Surigao, about 20km from Lipatan. We decided that whoever found a decent place would text the other person. I was first to arrive in Surigao but the first two places I went to had live bands playing directly underneath the rooms and the third was completely full. He texted me and said he found a 2 bed room for ₱1100 so we shared that for the night.

The next day we went our separate ways but since he and I both were headed to Davao we decided to stay in touch. He took a bus and I took my bike along the coast, opting to make a 2 or 3 day trip out of it. My goal was San Francisco (not THAT one) by way of Tandag. I thought the road from Surigao to Tandag would be great because the map showed the road as a highway. I also thought the road from Tandag to San Francisco would be sketchy because the road was represented as a road. I was wrong, the opposite was true actually. The road to Tandag was rough, but fun on the motorcycle. 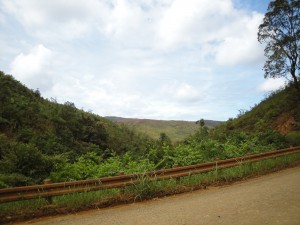 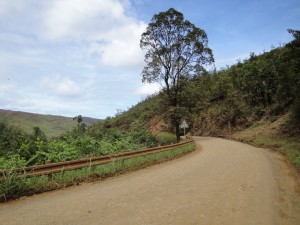 I was thinking as I started out that morning that, while it was beautiful, I was getting kind of tired of the same roads in the same countryside. Going the route I did was a nice change of pace. The road was a lot of fun and the view was gorgeous, but it took me twice as long as I expected to get to Tandag, averaging maybe 30 km/h. 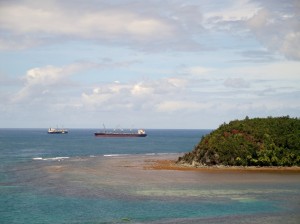 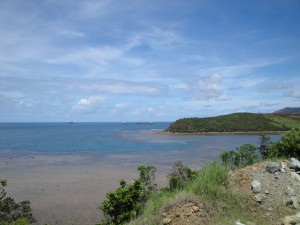 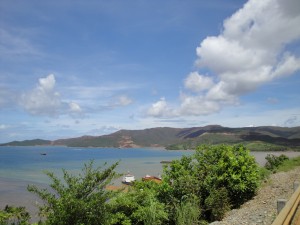 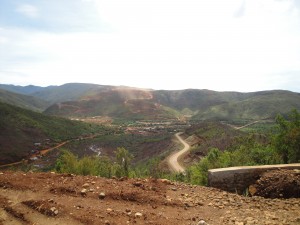 There were very few people living out here but there was a lot of mining going on. I wasn’t sure what they were mining, but the name of the company was Chinese and they were moving a lot of red dirt onto barges. Someone I asked later said they were mining gold but that doesn’t really make sense to me. That same person saw my map strapped to my tank bag and seriously though it was a treasure map, and he was the second person to say that. He didn’t understand that I used it to find my way around the Philippines. 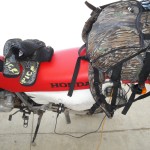 I stopped for gas and tried to pull out my mp3 player and found it had no battery left. I decided to pull out my charger and charge it while I rode! It was the first time I’ve needed to do this (and I didn’t really need to).  It worked wonderfully well and I rocked out to Muse for a while.

I got to Tandag around 3pm and was seriously considering staying there for the night because I thought the road to San Francisco would be bad too, but I asked a couple locals and they said it was cement all the way. I took their word for it and raced to San Francisco. I averaged maybe 70 km/h and the roads were really curvy and a lot of fun. I did stop a few times to snap some photos, but I was afraid of being out after dark. I made excellent time though and arrived in San Francisco around 5 pm.

The reason I wanted to make it to San Francisco was Villa Teresita Resort, recommended by my guidebook. They had a good menu, a swimming pool, some Philippine Eagles, and pretty inexpensive rooms (₱500 for a room with 2 beds and a fan). 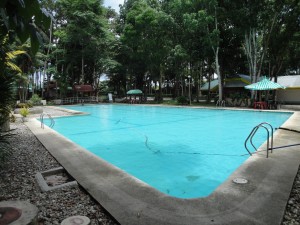 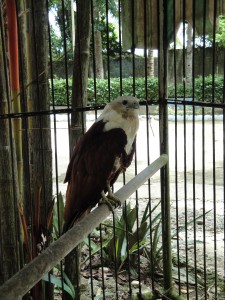 I felt bad for the eagles, they looked sad in their tiny cages. Wednesday night I swam a bit and played with some kids of a Filipino family there celebrating that their mom won a municipal seat in the election. After that and dinner I went back into town to get my email and post my last travel journal. I might stay here for an additional night, depending on when they will finish with my laundry.

This morning I opened up my door to this (that’s a mattress he’s sitting on):

Holy Moses, that is a ginormous bug. Ew. I'm glad you are having so much fun. That's awesome that your charger works so well! And I am loving all the pictures. Gorgeous.