I left Bogo Sunday morning to go to the wharf where I would catch my ferry. I arrived there around 10:00 so that I could catch the 11:00 ferry. But when they said 11:00 they really meant 13:00, so I sat in the shade, drinking a couple sodas and talking with some of the guys that worked at the wharf.

On Bogo wharf, after I paid about ₱700 to get my bike across to Leyte, I loaded it up on the ferry. 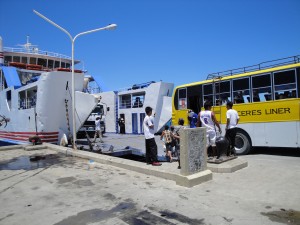 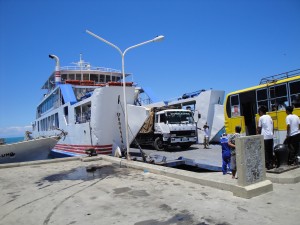 The ferry ride was a bit long but it was cool and peaceful. I even fell asleep for a while. I met a couple guys who were fun to talk to. 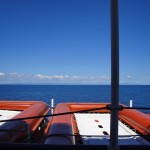 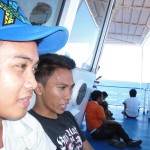 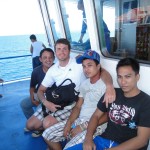 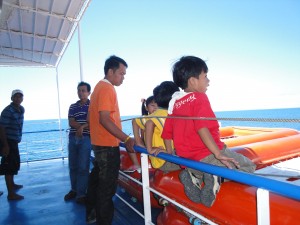 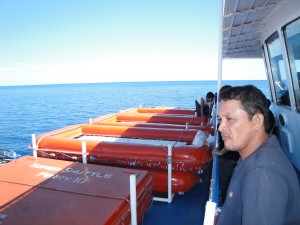 We caught a glimpse of a bunch of dolphins cavorting about near our ship. I wish I could have gotten a better shot of them but as it is I got a little bit of video from the ferry.

After we landed we grabbed a bite to eat, Pork Adobo and Goat Caldereta, it wasn’t bad. While we were eating an old lady came up and asked for some money. I am hesitant to give money, but I don’t mind giving food so I asked if she was hungry and she nodded, so I asked her what she wanted to eat. She said she just wanted fish, and the place we ate at didn’t have any fish so I gave her ₱20. John said she was Muslim and that’s why she only wanted fish. I didn’t connect the head scarf to the fact that she was Muslim. She looked pretty happy and shuffled away, I suppose to buy some fish.

After we ate we hopped on my bike and rode up to Tabango, Leyte, where John’s family lived 45 minutes away. It was a typical Filipino town house. We sat inside and John said I could sleep there. I accepted, since it was getting dark anyway.

His family cooked dinner of buwad, a small fish that is dried in the sun and sold per kilo, then fried before being eaten (incredibly smelly), a delicious eggplant dish, and several other dishes with, of course, rice. They offered me some rum, and I told them no thanks, after which John’s sister piped up with “you know, I always start to shake when I can’t get rum by 5 o’clock”. John told me she used to be a nun.

After dinner we went up onto the balcony with John’s nieces and his brother. His brother was drunk after a short time and I noticed his right hand was missing a few fingers. I asked him what happened, and he told me a very interesting story. He was a chief security guard in Bulacan at a cement plant; he was about 30. He had a lady who would wash and cook for him who was about 55 aaaaaand, they started living together. He said that she took care of him like a mother and he was like her child, which makes their un-filial relationship even more strange. Fast forward a few years, and they’re managing his parent’s coconut farm near Ormoc, Leyte. Out of the blue they’re both attacked by one of the help on the farm, her head is cut off and he barely survives, spending a month in the hospital. He was drunk enough by now that I couldn’t really tell if I was understanding him correctly. Later that night I asked John about it and he confirmed what I thought I had heard, and added that his brother’s wife was a very bad lady, and that she had put things in his brother’s food so that he would fall under her spell. I asked him if the man who attacked his brother and sister in law was ever caught, and he answered that no, he hadn’t been caught.

At this point I was a little weirded out by everything I had witnessed and decided it was time to go to bed. John prepared my bed, which I was uncomfortable to see was the same as his. It was a mat on the floor just under a massive shrine to Santa Maria. It was wide enough that we weren’t right next to each other, but still… I was getting concerned. I lay down and so did he, when he said “I can give you a massage.” I replied, “No thanks.” He countered with, “I can just give you one after you go to sleep,” which officially, certifiably, unequivocally freaked me out. I simply responded with, “no, don’t”. I stayed awake for a long time, wide eyed staring at the ceiling, jumping at every move he made.

Around 12am I thought it was safe to sleep, but now I couldn’t because there was a truck driving around blaring political messages from one of the candidates (elections are coming up) and sleeping on the hard floor was not easy. I put on some Enya (sleeping music for me) and tried, but every once in a while John would move and put his arm on me. I think he was just expressing his famous Filipino friendliness, but it was disturbing in the moment.

In the morning I left after eating some eggs and showering. Despite the Mativo family hospitality, I was itching to get on the road. Before I left though, I took a picture to remind myself of this very unique experience.

On the road I saw some more of beautiful Leyte. I really like Leyte, what I’ve seen so far of it. I did get a little lost, finding my way to Ormoc instead of Tacloban. I figured out how to get back on the right path and arrived in Tacloban around 2pm on Monday. 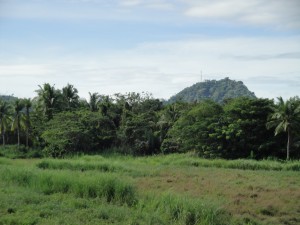 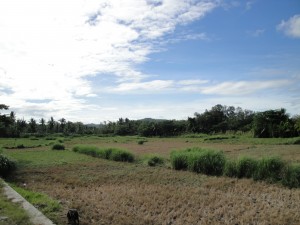 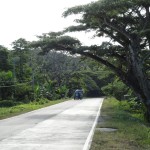 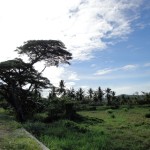 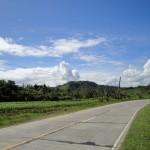 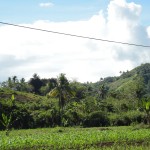 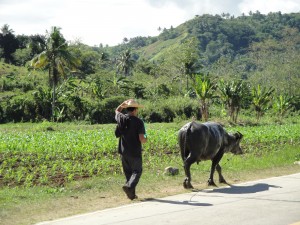 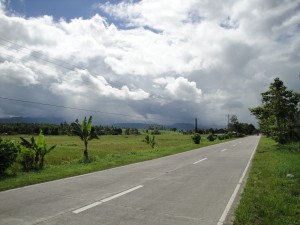 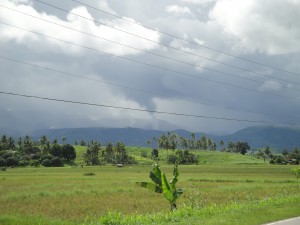 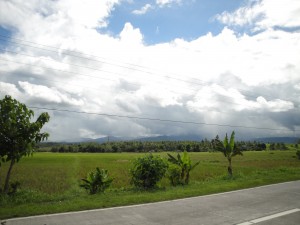 As you might have noticed, some of the clouds in the above pictures look a little ominous. It started raining very hard a couple hours outside of Tacloban and so I pulled over to a small shack full of Filipinos hiding from the rain. The picture below was taken after the rain had stopped and most had left, but there were over 16 of us huddled underneath, safe and dry beneath the nipa roof. I had a great a conversation with them while under the roof, waiting out the rain.

After the rain break I quickly got back on the road and arrived in Tacloban safe and sound. I read in my guidebook that Welcome Home Pensione was a good place to stay so that’s where I am right now. Tuesday night I ate at an all-you-can eat place which was pretty good and went back to my room and slept. Wednesday morning I slept in and then chatted with Julie on IM and even had a webcam chat with her. It was really nice to see her face, and I even got to see Charlie! The little rapscallion.

I’ll be here in Tacloban for a few days, my laundry will be done tomorrow but I might get some pants made here for next Sunday so we’ll see when I actually leave. I’ll head up north for a few days into Samar before heading south to Mindanao to continue my libot of the Visayas.

Haha, I gasped out loud so many times while reading this! haha, how crazy! Its been what? Just over 2 weeks and you have enough there to chalk it all up as the the craziest vacation ever.

Wow - sounds like an adventure. Where was that guy's wife? He sounds veerrry friendly. Hope you're ok - Love you lots and lots.

Aren't you a little more appreciative of me as your former roommate? I never did creepy things like that!

Wow...that would probably put me into a bit of a culture shock too. Yikes! And for the record, I am also glad you aren't there to add to your stash. :) All looks lovely...i hope you are having fun!

You always made me feel special, not uncomfortable at all.

I wondered that too, he said she was abroad, in Texas I think. It just didn't add up though.

Believe me, Julie is enough ;) And I mean that in a complimentary way.