Day 4: We woke up early, packed together all our things, and left the cabana at about 7:00 for the bus station. We were running a little late, and at the terminal we discovered that we had missed the express bus to Punta Gorda. We checked the schedule and saw the next one would be in an hour. We took the time to get some breakfast which ended up being a pretty poor excuse for a burrito. I still don’t know what it was made of but it looked and tasted a lot like something that had been eaten already…

The one good thing about it was that it ended up being the only gross thing we ate on our trip… thank goodness. We also still had a jug full of the saril that we bought from Betty but upon opening it we found that it was already in the early stages of fermentation. Bradford wanted to keep it, the stinker, but I convinced him to throw it away. One less thing to lug around and no drunken Bradfords to contend with (I kid)!

Before we got onto our bus we saw our friends the missionaries again, talked for a bit, and then we were off. The drive down to Punta Gorda was gorgeous. The scenery was beautiful and the weather was perfect. I was reminded a little bit of Kenya again when we kept stopping and stuffing more and more people onto the recycled school bus. Bradford and I took a video before it got too full to move our elbows.

Punta Gorda is a quaint coastal town and the last 15 minutes or so of our drive was right on the shoreline. It was gorgeous! We were the last ones to get off of the bus and our driver was kind enough to go beyond the normal route and drop us off as close as he could to our destination (Hickatee Cottages).

He let us off at the end of a dirt road on the edge of town with directions the rest of the way. Bradford and I quickly learned, however, that when given directions in Belize they’re only good for a little way, then you have to stop and ask for more. After about 4 miles of walking (in the hot sun with ALL of our bags mind you… yes I whined a little…) and three installments of directions from friendly natives (one of whom was the only of two people we met on our whole trip that didn’t speak English), we arrived to the refreshing, rainforesty acreage that was Hickatee. I was never happier.

Hickatee is a wonderful retreat that has multitudes of plant and animal species, nature walks ranging from 15-90 minutes through natural rainforest, three darling cottages, a “dipping pool”, a lodge, Oscar the cat, and a very hospitable British couple. When we arrived we walked up the gravel path to the deserted looking main lodge. We wandered a bit, trying to figure out what to do when a fellow guest who had been laying by the pool came and told us that our hosts had just laid down for a nap but that he was sure they wouldn’t mind checking us in first. I tried to stop him from doing said waking, but to no avail. Kate soon greeted us in her charming British way and very warmly introduced us to Hickatee, our cabin, and Oscar. We soon released Kate back to her nap and we immediately took turns in the shower to cleanse ourselves of the day’s bus ride and “walk”. Afterward I explored our little cottage and was instantly smitten. Our cottage is their “deluxe cottage”. It used to be Kate and Ian’s home until they moved closer to the lodge. Needless to say, the ONLY reason we stayed in the deluxe cottage was because Kate cut us a screaming deal. I adore Kate. Without her our whole Belize trip may not have worked out as well as it did. She was my pen pal during the planning stages of our trip and proved herself as a priceless resource of information.

Anyway, our cottage: it had a glorious bathroom with a very nice shower, a nice sitting room, a back patio, a front porch with a hammock, and a bedroom. It had tons of windows, the most beautiful wood floors I have ever seen (seriously, I wanted to ship them home with me) made from native trees, a large luxurious bathroom (did I say that already?), and comfy furniture. I wanted to take up permanent residence. We had a few hours to relax and snooze a little before we recruited Ian to drive us into town for dinner (it was Valentine’s Day so we decided to go out instead of staying in and having Kate cook us something). 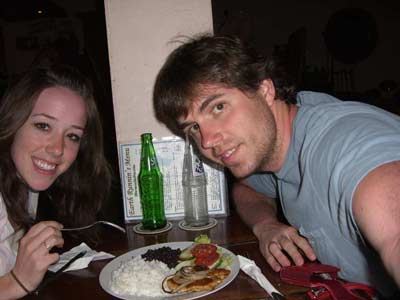 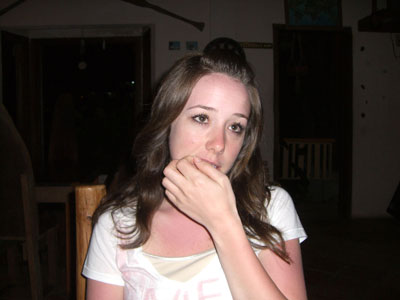 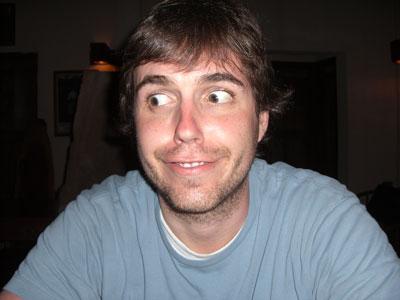 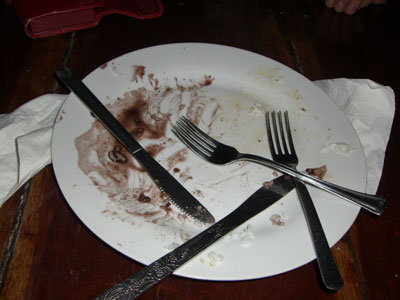 He dropped us off at a restaurant that was complete with chairs made from logs, a stage set up for a live reggae band, and little geckos singing and scuttling on the walls. I loved it. We got there at about 7:00 and there was no one there but us. We wanted to stay until 11:00 when the music started but we were so tired from the day that we decided to just call it a night. We walked to the main part of town and grabbed some ice cream from a little grocery store. After we finished we found a friendly cab driver to take us back to Hickatee. At night there’s a generator that runs for a few hours so Bradford and I picked out a movie from our cottage’s little library and watched a movie until the generator turned off. Then, we set up the hammock on the porch for Bradford to sleep in and I snuggled into the wonderful queen sized bed and fell into a blissful sleep. 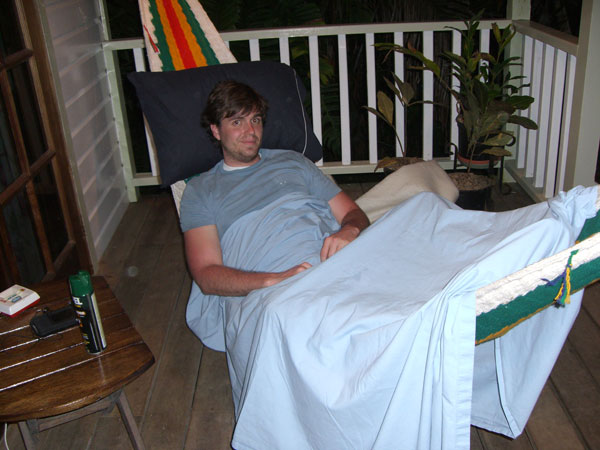 Day 5: When I woke up I was surprised to see Bradford asleep on the floor in the main room. I found out that he had come in halfway through the night because the hammock was uncomfortable. I think he was scared from the eerie monkey noises or Oscar pouncing on him but he denies it ;). Soon after we woke up, Ian brought us a tray of ginger tea that we took out onto the patio to enjoy in the cool morning air. After tea we dressed and headed to the lodge for breakfast. Kate is an excellent cook and breakfast was quite a treat of fresh fruit, eggs, sausage, bacon, and delicious homemade bread with local jams and honey. We also had the opportunity to chat with the other five guests that were staying there. After breakfast we all went our separate ways. Bradford and I took advantage of the free bike rentals, provided by Kate and Ian, to ride into town and found a spot on a bench by the beach.

We sat and enjoyed the beautiful weather and sea breeze. We were soon joined by a native teenager. I think Bradford and I were both holding our breath for a minute, waiting for him to finally ask us for money or something but we were pleasantly surprised to find that he really did just want to visit with us.

After a few hours of enjoying the beach and our new friend’s company, we rode around town again and found a shop so we could purchase some delicious hot sauce. I think I ended up with 5 bottles at the end of the trip, plus three for Bradford’s dad… Its good stuff. And all different flavors. After we made our purchases we went back to Hickatee and enjoyed a nice sit in the pool and conversation with one of the other  guests. We, read, talked, snoozed, and enjoyed being outside until the bugs became too much of an annoyance. We went to the cabin for a nap and then went on one of the nature trails before dinner. We’d wanted to catch a glimpse of all the animals but we started a little later than we’d hoped and we ended up stumbling around in the dark. It was kind of eerie, especially with the occasional spider web in the face, but it was really neat to see and hear the rainforest at night. Once we finally found our way out of the trees we met the rest of the group on the lodge porch for dinner at our respective tables. I had swordfish and a salad and Bradford had soup and chicken. I don’t love fish, but Kate can make just about anything taste great. After dinner we had fresh ginger tea and a plate of chocolate made by a local Mayan woman in the Toledo district. She grows all the ingredients herself and the result is some deliciously earthy tasting chocolate that can easily become an addiction… We bought 6 bars to take home with us. It was all they had or else I would’ve gladly bought more. 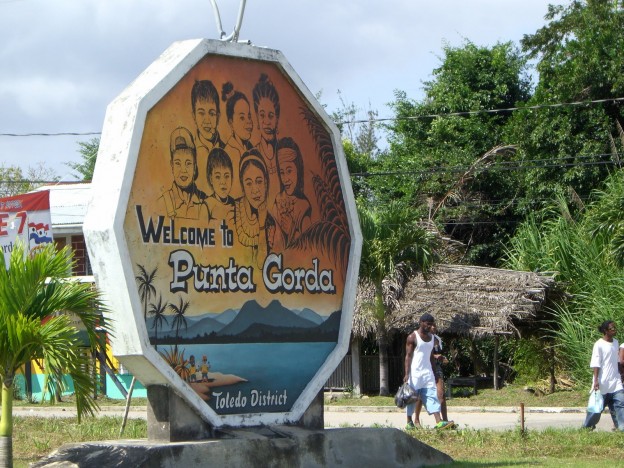 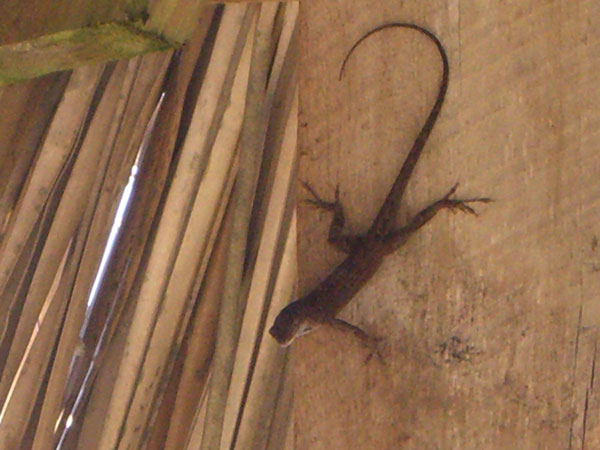 After dinner we sat and talked with Ian and Kate about the ways they try to live green and support the local businesses, not the larger resort type places and business that are squelching some of the native charm. We also played with Oscar, the orange tabby cat that roams the premises. He has a stick with a toy bug attached by some fishing line and he chased it all over the lodge. It was really entertaining.After our enjoyable visit with Ian and Kate we went to our lodge to watch another movie and then showered, got our things put together for our early morning departure the next day, and settled in for a few hours of sleep.

This is part 3 of a 4 part blog about Julie and Bradford’s trip to Belize. Posts 1 and 3 will are by Julie, while posts 2 and 4 are by Bradford.