I went to the dentist today for the first time in over 3 years. I know, and I’m a bad flosser too. Since I don’t have dental insurance, the cost for the cleaning and x-rays was $173.40 which included a complimentary toothbrush. Why the toothbrush? Why not just knock $100 off my total bill? I would like that much more than a red toothbrush and some floss.

And now the server shenanigans! I decided today to get rid of my desktop. Not when I get my SheevaPlug, but NOW (I have a hard time concentrating on homework when I could be playing Team Fortress 2). So, I took some pictures, slapped it on the internet, and took my Debian lamp server image from my desktop and put it on my Aspire One.  Yep! My little guy is now a server! It serves up cached pages from WordPress really quickly but some of the back end stuff (wp-admin) is a little slower.  The music in my other blog posts won’t work until I get the music from my desktop into an external hard drive. Things are looking good for that SheevaPlug. It has a slower clocked CPU, and instead of x86 it’s ARM, so I really don’t know what to expect. But at least I know it will work. 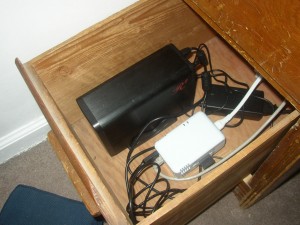 I’ve actually ordered the SheevaPlug – it should ship sometime this month. Last night I also ordered a 2-drive JBOD USB hard drive enclosure (to put 2 hard drives in that you can just plug into a computer via USB) along with a big fatty 1TB HDD for all my media files for my current Aspire Server and my SheevaPlug server once I have it all set up.

I spoke with the uber-nerd at N.E.R.D Command Central Defcon Enforcement Datacenter (ie BYU CS System Admins) and he suggested I use Gentoo on my SheevaPlug because I can compile it all from source and have little overhead (ie unneeded stuff included in a basic Linux distro). To be honest I’ve never compiled an entire OS so this will be very educational. But I agree, I want as little overhead as possible. Once I get a good image I’ll probably post it for download for anyone who is interested.

This is what I plan to put on my SheevaPlug Server:

I’ll post about my progress once I get my SheevaPlug.

So teeny! No more massive, wall sized monitor!!! I think you run in extremes... things have to be super huge or itty bitty. ;) That's cool that you could switch it to the little guy.

I was planning on doing EXACTLY the same thing you're doing (specifically Linux > Apache > MySQL and FTP and BT as well)... Was also thinking about buying a dual 1tb RAID HDD enclosure from Newegg and hooking it up to this...

PLEASE keep us updated as to how this turns out for you... I was just planning on installing Ubuntu Server or a Debian distro on it... But I'm curious about how well this will work!

Got your sheevaplug yet? Don't know of anyone who has. I certainly don't have mine.

No, not yet. I emailed them and they said "end of march", just like everyone else. I'm going to shoot them another email.

I got the following response to my email:

We did start the shipments of all the units,

All order are been processed by First-In-First-Out basis.

Your order has been processed by the Fulfillment center,

You should receive tracking number via email is a very short time.