I left Sipalay Friday morning around 11 am. I walked back to my bike where they told me that I had to wait a couple hours for the tide to go down because at high tide the road going back to the highway was covered in water. A couple guys who walked through it showed me the high water mark on their shorts to make their point. I just said I’d see what it was like and put my gear on and left. Once I got to the water it was a lot of fun driving through it, until I hit the deep water and a huge wave went up and over me instead of to the left and the right. I was wet but it was worth it and I quickly dried on the road.

The road to Kabankalan was nice and easy, a road I had only taken once before. I finally got to Kabankalan after about an hour and a half of driving. I had forgotten the layout of the city so I was a little lost when I entered Kabankalan but I soon found the old Coloso Street where I used to live right next to the members I knew the best, the Pioquinto family. I knocked at the gate and a voice from inside yelled out “Who are you looking for?” “The Pioquinto family” “Who are you?” “Bradford” “Who is that?” “I was an Elder back in the day” “Who?” “Elder Law” “Elder Law!!” The Pioquinto family was great; they let me sleep in their house for 3 nights, they fed me very well, and they did my laundry! Here’s a picture I took with them right before I transferred in February 2005: 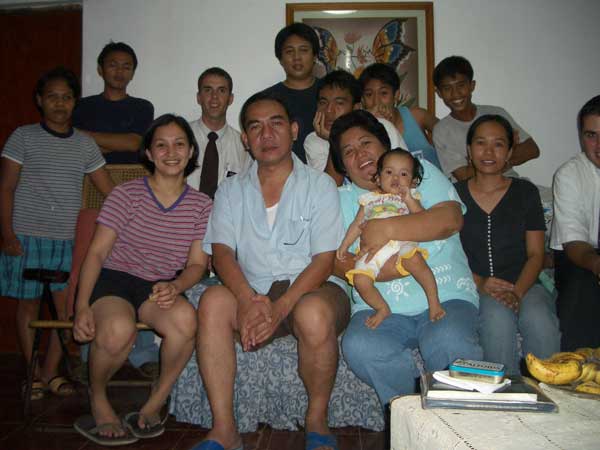 Here’s a “then and now” picture of Trina and Arianne. 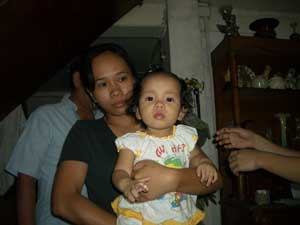 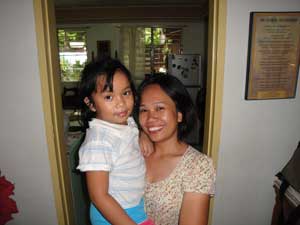 The next day I went up to Mag-aso Falls with Royce and Jet Jet. The three of us hopped on the bike and roared up the mountain even though the clouds looked very threatening. Soon after we left we were rained upon – it hurt a lot at the speed I was going so I had to slow down. It was a lot of fun though and we were completely soaked by the time we reached the falls. By that time the rain had stopped and the skies looked a little better.

The falls were great, and I swam about in the pool below them. 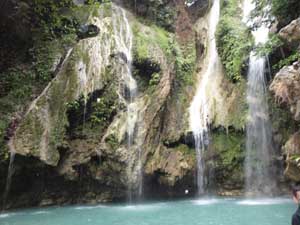 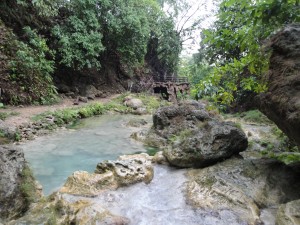 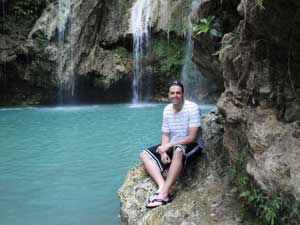 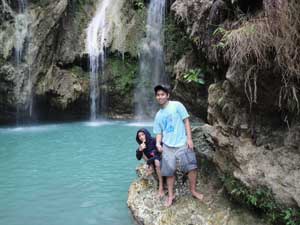 After viewing the falls we went to swim in the pool and check out some of the smaller pools up above. 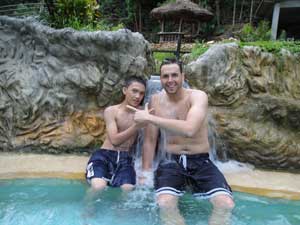 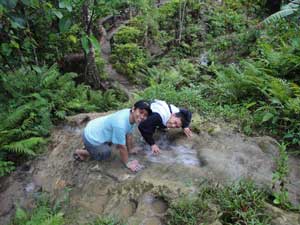 The next day was Sunday and we went to church. It was nice to see a bunch of the members I knew back over 5 years ago when I was assigned here. Was it really 5 years ago? Wow… I was particularly happy to see Brother Roberto Bruno and his wife, who we taught and who were so faithful. They were eventually baptized and even went to the temple in 2007. It was a happy reunion to see them. Here’s a picture I took with them Monday before I left Kabankalan:

After church I offered to work with Elder Headman, one of the missionaries assigned to Kabankalan. He accepted and after Ward Mission Correlation and lunch at the Pioquinto’s we went out. We were punted a lot at the beginning and I thought maybe I had accidentally cursed the area by coming back and creating some sort of spirit-time warp but we eventually were able to teach.

I was wearing the full missionary uniform minus the name tag. Several times I introduced myself and looked down to point at my nametag only to remember that I wasn’t still a skinny 20 year old missionary. It was a little sad actually, because walking through the same fields with an American missionary and a Filipino member, the same as I had 5 years ago, made me feel as if I had never left.

Everyone, even the Pioquintos and Elder Headman, had a really hard time calling me Brother Law or Brad instead of “Elder Law”. I would introduce myself as Bradford but people here have difficulty in saying Bradford so I just introduced myself as Brad. From there I was Brod (from “Brother”) Brad, and then I became Brad Brad, or Brad2x. I have a new Filipino nickname.

After all our appointments King and I took Elder Headman back to his apartment where he met his companion. I drove King home and rode back to the Pioquinto’s the back way, a dark, lonely road that went through several sugar cane fields. I was amazed at how quickly and easily I had felt like I was a missionary again. I’m sure it was simply a matter of being in familiar territory in my memory.

The next day I woke up and went around to see a few of the members I wanted to see before I left for La Carlotta and San Enrique. It was nice. I took Jet Jet with me and on the way across the river to see Bro. Mangao and drink some coconuts we met up with Jeming and his brother. The four of us went across and got Bro. Mangao to climb Bro. Parolanan’s coconut trees and get some down. Then we sat down and mixed in some powdered milk and sugar and drank in the deliciousness.

It was really hot across the river so we left after a while. The guys invited me to attend a bikini fashion show at the baranggay festival that was going on that night but it was getting late so I declined. The drive to La Carlotta took only an hour and a half. I’m here now in a pension house, I haven’t stopped by anyone because it’s late and I’m tired but tomorrow I’m going to say hi to some of my friends here in La Carlotta. I am covered in ants for some reason, I think the air conditioning unit in my room is shooting them out. 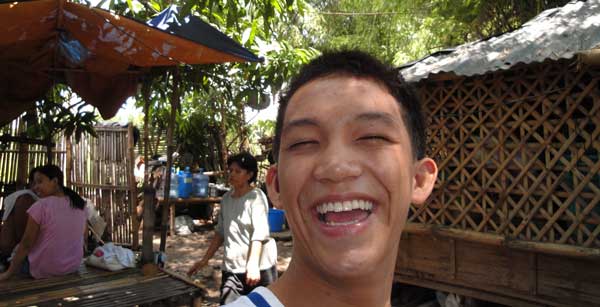 I'm so glad the Pioquintos remembered you! That's so wonderful. I bet it was a lot of fun to see old members. And I for one am glad you didn't go to the bikini show ;).

I was searching for Kabankalan Pension Houses when I came across your blog. Nice one! Very interesting.