Banff was beautiful, but we had to continue south to keep up with our schedule. British Columbia awaited us, and it had its own unique natural beauty that competed well with its sibling, Alberta. We discovered Destination Highway 2, and were lucky enough to visit my Great Uncle Grant which made the trip all the sweeter. 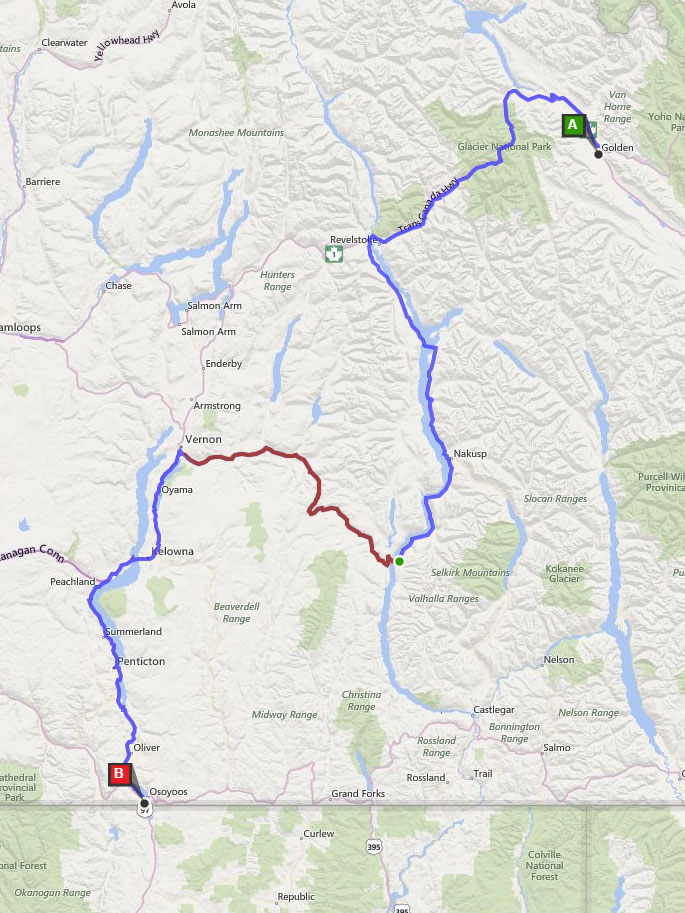 Day 6: Revelstoke and a Glimpse of Western British Columbia

We had a good night in Golden and woke up early to get on the road; we had a lot of miles to make up. My dad has an uncle in Osoyoos that he wanted to visit, but we had made such poor time the entire trip that we reluctantly agreed that we weren’t going to make it to Osoyoos. I was disappointed. My dad had such great stories of his boyhood time with Uncle Grant, and I had never met the man.

Our next destination was Revelstoke, which was at the end of a long twisty road.

For more video of the road between Revelstoke and Nakusp, click here.

The road was slow - we had to take some of the curves at 15 km/h or less. The Spyder was even slower because of the way it handles curves.

The summit of Mount Revelstoke was worth the extra 1 km hike (which felt like 10) beyond the parking area, and God treated us with a gorgeous panorama of the entire valley below. 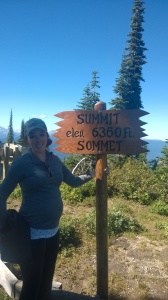 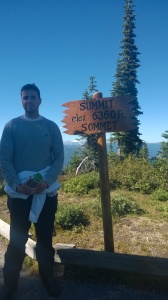 We ate lunch and hit the road as soon as we had taken in as much of the view as we possibly could. The ride down the mountain was a little spooky because it’s harder to control your speed with your brakes than it is with your throttle and some of the hairpin curves snuck up on us. We made it down safely, however, and continued south on highway 23.

The functional ferry system in British Columbia surprised me. They ran on the half hour most of the time, and were free (paid by the high fuel prices, probably). The wait at the Shelter Bay Ferry was nice and gave us a chance to talk to fellow riders and stretch out our legs. Another couple on adventure touring bikes told us there was a decent campground at Nakusp, and that we could make it there in the evening with enough light to set up camp. 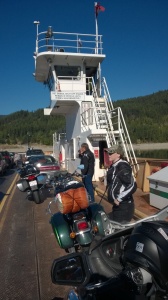 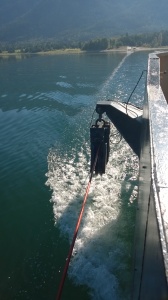 The campground at Nakusp wasn’t bad, and they had free showers included in the price of the camp spot. While we were settling in and pitching our tents, I met another rider who was by himself. He mentioned that one of the best highways in British Columbia for riders, second best, actually (Destination Highway 2), was just down the road. It would take us to Vernon, BC and eventually through Osoyoos, which was where Uncle Grant was living. It was the perfect excuse to go see Grant and was the chance of a lifetime on one of the best roads in the world for motorcycle riders. 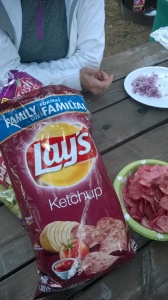 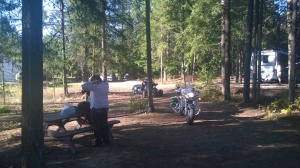 We left so early that for most of the morning we were in the shadow of the Selkirk Mountains and it was pretty cold. The cold shadows lasted until Fauquier where we finally felt the warmth of the sun. Julie and I were so far ahead of my parents that I couldn’t see them in my rear-view mirror. We made it just in time to get on the ferry, but it was an anxious couple of minutes until they showed up, the last ones on the boat. It was a short cable-ferry ride across the Columbia, and on the other side awaited the best highway I’ve ever experienced on a motorcycle. I’ve queued the video below to the 17 minute mark, where I rode my favorite segment of the highway.

We reluctantly made it to Vernon and ate lunch at A&W. A growing theory that food was better in Canada surfaced and we all agreed that all the food we had eaten, even at fast food chains, had been noticeably more delicious and more wholesome than similar food in the United States. There is something very wrong with our food system in the United States. Watch the excellent documentary Food, Inc. and read the fantastic book The Omnivore’s Dilemma by Michael Pollan to understand what has gone wrong with America’s food industry and how to influence it for positive change.

After getting a little lost in Vernon, we continued South and found ourselves entering the fruit basket of Canada. We stopped for a delicious fruit break and I picked up a bottle of Apricot Brandy syrup. Delicious.

After we passed through the beautiful vineyards and orchards of Oliver, we arrived in Osoyoos as the sun was lowering in the western sky. We eventually found the apartment complex that Uncle Grant lived in and were surprised to learn that he had been in the Oliver hospital for the last several days. I felt like it was providential that we decided to make the trip to Osoyoos. We went back to Oliver and found Grant in a hospital bed. I had never met him, but he immediately took me in by his warm personality and made me feel wonderful, instead of the other way around. I felt that I had lost something by never having met him before. It makes me sad that it will most likely be a long time before I can meet him again. He had such a positive attitude for someone stuck in a hospital bed with no close family members, I hope we were able to make him feel a small amount of joy while we visited; I wish we could have done more.

We spent around an hour talking with Grant and getting to know him. It was getting darker by the minute and still had to find a camp and some dinner.  We left with a promise to return in the morning.

We eventually found a camp a few miles further north along the highway that was cheap with laundry and shower facilities. It seemed perfect. We ate a decent dinner at a bar nearby.

Since we were so exhausted we went to bed not long after dinner. Later that night loud music from an RV full of drunk men woke me up. Song after song played and each one made me more angry, especially since they would wait long enough for me to doze off between tracks. Other campers were also upset, but only tooted their horns - a very polite way of telling the drunk RV to go to hell. Eventually, I became so indignant I confronted them and got into a shouting match with one of them who was so drunk he could barely stand. At least they stopped playing their music loudly after that. I realized it was a bad idea to confront them alone, in case they were the violent variety of drunk. But the next morning they complimented my bike on their way out of the camp, so I suspect they didn’t even remember the affair. I should have just used a pair of earplugs.

I loved meeting Unkie Grant. Such a sunshiny personality. He brightened my day even though he was the one in the hospital bed! And that road was definitely one of the best of the trip.